Who mirrors whom?  The wild dog and
the tame dog groucho-marx their way
up the streambed in moonlight reflected
off Brother Sun.  I am the elder Sister,
a major player nicknamed Mirror as if
I had no substance of my own.  As if.

I am made of human secrets and dreams,
of Brother Sun’s fairness in carefully
turning the spit on which humanity fries,
and of light bedrock—pieces of which hide
in cardboard boxes packed in the 1960s
after the Moon landing, at dream’s end.

Apollo took me to earth after touching my
surface, walking on my face, and forgetting
himself in me for a minute.  I liked that,
liked looking at Mankind’s steps up close
where I could weigh them on Justice's
scales as Comedy and Tragedy watched.

On one, his mind-body density balanced
his lightness of spirit on the other (where
he curled daggers and co-opted wounds).  O!
His walk and treasure hunt, his prints on me,
the pain and dust and stolen heart stones
I learned loss—it happens all the time.

I hear the words of Shakespeare, O swear
not by the moon, the inconstant moon
Was not Apollo the inconstant one?   Who
was here?  the tame dog or the wild wolf?
Which came first? wildness or domesticity?
Who reflects whom? Who sheds light?

I whisper It happens all the time. I allow
a touch and he takes me away in pieces;
I touch him, too, and he still leaves me,
shaking the dust from the soles of his shoes
loving me from a distance if I smile, saying
he was just lost for a while.  Forgive him.

Brother Sun will not reflect my feelings—
he rages.  He has given life; he can take it.
He thinks he is smarter than me: He is a 19
and I am an 18 in the hierarchy of  Tarot
(though that does not reflect wisdom at all)
and he never liked America’s Apollo ship

Apollo is mine; Apollo drives my Chariot!
he says constantly.  You are mine, he says,
at which I object! I am fully Sister Moon,
not only The Way he protects earth.  I am
holy, I whisper, witness happens all the time.
Dog reflects wolf by choice, not coercion.

I have my own ships for human seekers
pulled and pushed by meters, rudderless,
and no driver needed, not Apollo nor Charon
for Apollo did not remove the Dream Ways
on his mission and neither can Brother Sun
with or without his light, I will be here. 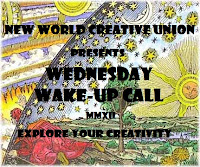 Email ThisBlogThis!Share to TwitterShare to FacebookShare to Pinterest
Labels: For Book

I really love where you took the prompt. A feast of a poem with delicious layers. I reread it several times, wonderful!

Hi Susan, and thank you for adding your composition to our NWCU WWUC! It was so very nice to see how you took the elements and recombined them!

I thoroughly enjoyed all of it, especially the inclusion of, "I whisper It happens all the time..." Nicely done and nicely said! Applause, applause! Thanks again!

You are brave to take that challenge, Susan. I especially like stanzas 5 & 6.

Wow! You have created a masterpiece with the challenge. I love stanzas five and six. "With or without his light I will be here." Amen

Love this, throughout, but especially that "As if." ;)

Susan! Wow! What a fantastic play with the prompt...you're words just soar...your spirit on show. LOVED this!

unique and wonderful direction to take this prompt, susan. love it. and more so how you used and blended the quote. super work :)

Excellent - and I agree the moon is never inconstant but how would Will have known?